Whose word is now law? 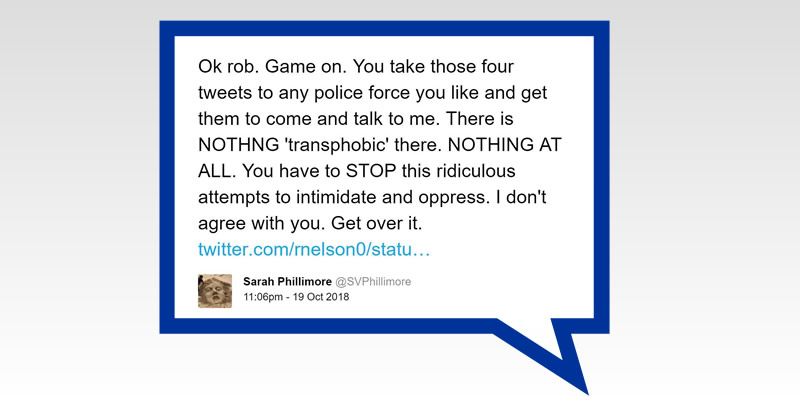 I have been a family law barrister since 1999 and the site administrator of the Child Protection Resource www.childprotectionresource.online since 2014.

My motto is that of Carl Rogers:

The facts are always friendly. Every bit of evidence one can acquire, in any area, leads one that much closer to what is true. And being closer to the truth can never be a harmful or dangerous or unsatisfying thing.

Why do I support Fair Cop?

I have spent a probably unhealthy amount of time arguing with people online since at least 2014. My concerns were primarily about the family courts and child protection. Issues of gender recognition weren’t really on my radar.

But in the autumn of 2018 I made a few comments on Twitter. Nothing I thought that was objectionable. A reasonable concern that as a disabled person, I did not feel comfortable with self identification; no disabled person can ‘identify’ out of their condition.

The response was swift and immediate from a variety of accounts. I would be ‘reported’ to my ‘employer’ for my ‘hate’. I tried pointing out that I was, as a barrister, a self-employed sole trader so good luck with that. Threats then shifted to reporting me to my regulator. At the time of writing I haven’t heard from the Bar Standards Board that they are investigating me for my ‘transphobic hate’. Should they do so, I will defend my position. I don’t believe people can change sex. I don’t believe it’s a good idea to allow pre-school children to ‘fully socially transition’. I don’t think those views make me ‘hateful’. They are views I am entitled to have and entitled to express.

But this really got me thinking. I lifted my head from my normal round of concern and read a little more widely. What I saw was deeply troubling. I read of other men and women who had been threatened in similar ways and many not as lucky as I – they did have employers, who worried about the reputation of their organisations and who didn’t want the hassle. People were losing their jobs over this. Even worse, rather than just a private matter between people and their employers, now the police are apparently completely on board with treating an opinion, honestly held, as a ‘hate crime’ if it causes offence to anyone.

When Fair Cop asked me if I wanted to get involved, I was delighted. In many years of clashing swords on the internet on some pretty emotional issues such as child abuse and adoption, I had never experienced anything like the kind of anger, vitriol and intimidation that appeared to follow any attempt to express concern or unease over self identification and the rights of women and girls to protected spaces.

A society that elevates the rights of one group not to be offended, against the rights of others to have and express opinions, is a society in serious trouble. Driving people and their fears underground makes no one any safer. People’s reasonable and genuine fears do not disappear simply because they are told they are ‘hateful’. We have to be able to have the courage to talk to one another, to see if there is a space where we can co-exist. Driving people out of their jobs, co-opting the police to elevate the rights of one minority group against all others will lead us inevitably to a very dark place in our history.

I am proud to be part of a group that wants to do what it can to shine a light.

1 thought on “Whose word is now law?”