Who are the hate criminals? 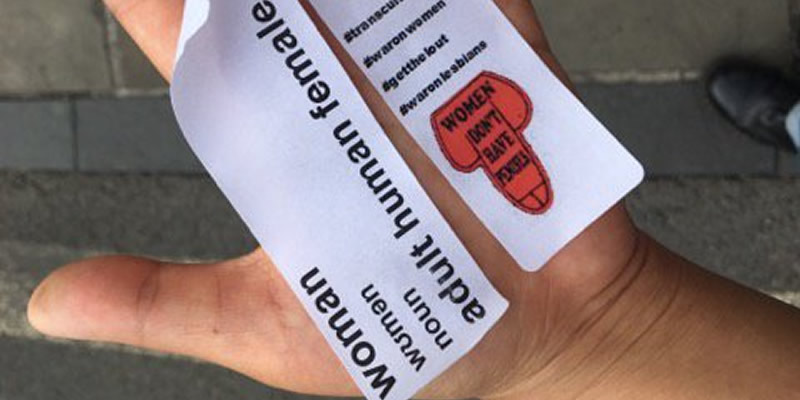 In one of the more disturbing hate crimes of recent times, a masked mob of vigilantes harassed a peaceful meeting convened to discuss transgender rights. These thugs verbally abused vulnerable trans people as they entered the venue, chanting “trans scum” and even throwing liquid over some of the terrified attendees. As the meeting went ahead the mob kept up their intimidatory tactics, continuing their hateful chanting while beating an aggressive tattoo on the venue’s windows so loud, those inside could barely hear themselves think, let alone listen to the speakers.

Who could argue that such a hate-filled mob, hell-bent on intimidating and terrifying a peaceful group of trans people, deserve the harshest possible sentence under the Public Order Act?

Except, as you know, this didn’t happen.

The attack occurred alright, but the vigilantes were trans activists and the victims were women who had dared to hold a fringe meeting at the Labour Party Conference to discuss their rights. And not only did these thugs escape prosecution; the police stood by and watched them commit these offences.

Not any old stickers, but ones that dared to display the dictionary definition of “woman” and others that make the uncontroversial claim that “women don’t have penises”.

There is a chilling irony in the police’s response to these two incidents, and one that’s thrown into even sharper relief by sentencing guidelines for public order offences. Behaviour with intent to cause harassment, alarm or distress is now punishable with a custodial sentence of up to six months.

Yes, the transgender debate is toxic. Passions run high and there is no love lost (and little chance of accommodation) between transgender ideologues and their opponents. But where the former have been so successful is in convincing the police that the definition of woman — an adult human female – is in itself hateful.

This leads to the astonishing situation in which thugs can intimidate a peaceful group of women in full view of the police, while the appearance of factual stickers in Oxford sparks a police investigation (and makes the national news).

The Brighton attack wasn’t an isolated incident. Every Woman’s Place UK event meets with intimidation and harassment, whether it’s crowds screaming abuse outside, pressure on the venue to cancel the meeting, and even bomb threats. But it’s stickers that warrant a police investigation.

Stories about stickers are a boon to the transgender ideology because they enable activists to claim that they are uniquely oppressed. Since the only qualification for a hate crime is that someone, somewhere perceives it to be motivated by hate, a single sticker can be responsible for dozens of hate crimes reports. Small wonder, then, that “anti-trans hate crimes” have risen by 37 per cent in the last year.

For all their aspiring victimhood, it’s quite clear that trans activists have uniquely free rein to intimidate, harass and abuse women, while it’s equally apparent that women will face the full force of the law — including, potentially, six months in prison — for stating biological reality.

Women can’t be the victims of hate crimes since they are not a protected group under police and CPS guidelines. They will have to be content with their traditional role as victims of men — only now, they can add the law to their long list of abusers.

1 thought on “Who are the hate criminals?”