Storm in a coffee cup? 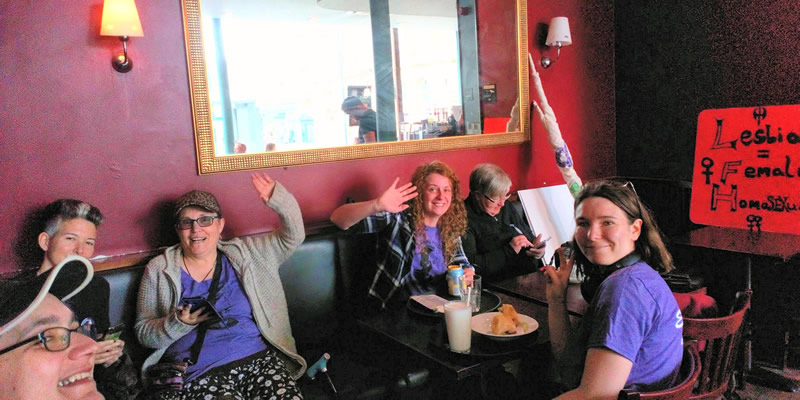 A small group of lesbians went into a Caffè Nero in Bradford yesterday. They were attending Bradford Pride and had a banner with them which read ‘lesbians don’t have penises’. Two policemen arrived. There’d been a report of a hate incident at Bradford Pride and they were investigating.

According to one of the women present, the police asked whether this was ‘a hate group’. The women reassured the police that they didn’t hate anyone, but that they were ‘pro-lesbian’. The police continued to question the group, checking that the women were not in any way hateful. They concluded by wishing the women a happy Pride and expressing the hope that Pride would be a happy experience ‘for everyone’ — which the women took as a warning.

If you’re new to these issues you might at this point be wondering why lesbians have a banner proclaiming their (surely obvious) aversion to penis, and why the police might suspect six coffee-drinking women of being a hate group. Here’s a quick précis of the necessary background:

All the main LGBT organisations in the UK, taking their cue from the lobbying charity Stonewall, take the view that being a man or a woman is nothing to do with whether we have male or female bodies, but rather an internal essence of womanhood or manhood. This internal essence is called ‘gender identity’ — it’s essentially a feeling. According to this doctrine, anyone claiming to be a woman, and who is sexually attracted to women, is a lesbian. So we have a situation in which male-bodied people can say ‘I identify as a woman and I am a lesbian’ — and every LGBT organisation in the UK, including Pride, will respond ‘yes, you are.’

The lesbian women at Bradford Pride were there to protest about this penises-optional view of lesbianism and share campaigning information in which they argue that it is putting lesbians under pressure to have sex with men. The movement is called #GetTheLOut and you can find out more about it here.

But why should this be a matter for the police? Why should the police have an interest in how lesbianism is defined?

The UK has a complex set of hate crime law built up over the last two decades and which continues to expand. A side effect of this legislation has been an increasing politicising of the concept of ‘hate’. With the increasing strength of transgender activism over the last decade the definition of ‘hate’ has become an ideological battleground.

When it comes to anti-gay and anti-lesbian hate crime, we use the term homophobia to denote the prejudice that motivates it. A parallel concept of transphobia to protect people who are trans, or are perceived to be trans, is clearly necessary. Public sector organisations in the UK look to the charity Stonewall for their understanding of LGBT issues — including definitions. The Stonewall definition of transphobia is: “the fear or dislike of someone based on the fact they are trans, including the denial/refusal to accept their gender identity” (my bold). The first part of this definition is just a trans version of the definition of homophobia. But the second part is something quite different. The second part frames non-belief in the concept of gender identity as evidence of hate. So, applying this definition of transphobia, the ‘lesbians don’t have penises’ banner transforms from a statement of the obvious to potential hate speech.

The Stonewall/Pride version of lesbianism, with its insistence that some women have penises and that lesbians must accept them, effectively attempts to coerce lesbians into accepting male bodies. The method of coercion is a politicised and widely accepted definition of transphobia which labels refusenik women as bigots and brings them into the purview of hate crime legislation and the police. And that is how we end up with a group of lesbians in a Bradford Caffè Nero answering questions from a pair of police officers.

So let’s be clear. Lesbians don’t have penises — and if every lesbian in the country simultaneously shouted this from a rooftop, it should still be absolutely no business of the police.

1 thought on “Storm in a coffee cup?”