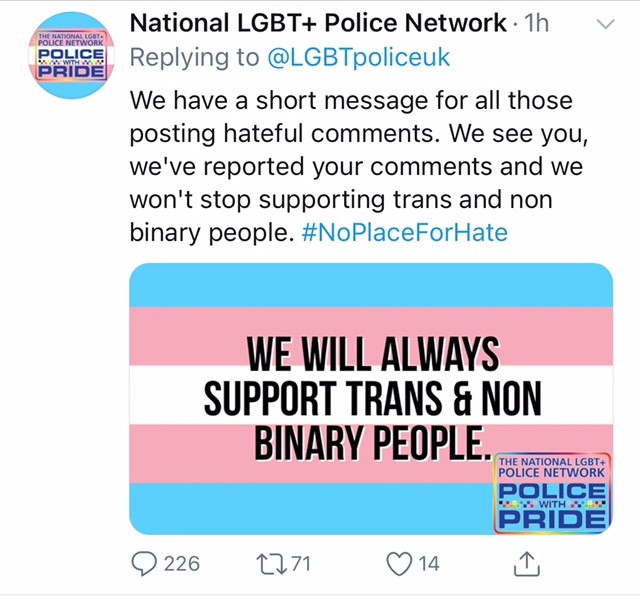 We are sharing with you a complaint to the Independent Office for Police Conduct made by one of our followers to the LGBT police association, in response to concerning publications by their Twitter account that suggested that they were reporting members of the public who were leaving unsupportive comments on their Twitter feed.

This organisation appears to be unaccountable and has not responded, so far as we know, to any complaints or question about their behaviour.

We hope other people will complain. Please let us know what the outcome is. We think this is unacceptable behaviour from any organisation that promotes itself as connected with the police.

Some details omitted for clarity and brevity and to protect the personal details of the complainant.

*Which police force/organisation is your complaint about?

*What would you like to happen as a result of your complaint?

That any accounts on social media be maintained by named persons with accountability for content, that they be rigorously monitored for factual accuracy and lawful content. That thorough vetting procedures for social media employment appointments be undertaken and strict procedures be created for said appointees, to include disciplinary actions for failure to meet standards. That these standards should be made available for public scrutiny.

An acknowledgement that the public have lost confidence in the police to maintain standards of professional behaviour and by extension the agreement that the philosophy of “policing by common consent” has been severely damaged. That a commitment will be made to undertake thorough investigations of the undue influence of Stonewall and Stonewall’s values in often biased or incorrect interpretation of the law in police policies, management and workplace culture.

This influence has clearly pervaded and resulted in inaccurate and unlawful content on social media output, and I further request that these investigations be extended to cover all LGBTQ social media accounts affiliated/associated with the police.

Do you believe the incident you are complaining about involved discrimination? Discrimination refers to being treated differently because of who you are or because you possess certain characteristics. Please add an ‘X’ next to your answer.

If you believe discrimination was involved in the incident you are complaining about, please mark one or more of the characteristics involved with an ‘X’.

It is noteworthy and significant to the nature of this complaint that the vehicle for complaint, i.e. this form does not automatically include the protected characteristic of SEX included in the Equality Act 2010, but does include the category of gender above. Gender reassignment is indeed protected. Gender, which is an undefined, inner sense of one’s feelings, and changes according to one’s personality from person to person, or imposed by socially constructed stereotypical behaviours or beliefs, is not protected.

Do you know any details about the police officers/police staff involved in your complaint? Please provide the rank, number, first name(s) and/or last name(s) of the officer(s) below.

lgbt.police.uk describe themselves as a network, I would classify them as a political lobby group within the police force. Due to the relative anonymity of the twitter account of this political lobby group and in lieu of being unable to name the individual posting the harassing messages I have included the names of identifiable officers who, in a leadership capacity, ultimately are responsible for the output of this group’s social media content:

In addition, if none of the named persons above, ‘Anonymous’ person/s running the Twitter account @LGBTpoliceuk, and posting on their behalf.

Section 5 – Witnesses to the incident

Please note: when you are contacted about your complaint you will have the opportunity to describe any further witnesses.

Were there any witnesses?

The witnesses are; followers of the Twitter account and those responding to its output, some of whom can be found at the link:

“He who controls the language, controls the masses”; Saul Alinsky 1909-1972, political theorist and community activist.

Why are lgbt.police.uk / @LGBTpoliceuk bringing the Police into disrepute with Orwellian Policing of thoughts and opinions?

Moreover, the statement,” transwomen are women” (#TWAW) is an ideological assertion of indoctrination, with no basis in scientific fact. Note the equivalent acronym TMAM is not used so prevalently, underlining the fact that this is the language of a sexist transgender movement which seeks to undermine the rights of women and girls. This affects myself and all other women online as this rhetoric is used online by Trans Radical Activists along with abusive imagery intended to intimidate and frighten women. (See https://terfisaslur.com/)

“We believe that trans men are men, trans women are women and non binary people are fabulous”. (Sic.)

“Everyone has the right to freedom of expression. This right shall include freedom to hold opinions and to receive and impart information and ideas without interference by public authority and regardless of frontiers. This Article shall not prevent States from requiring the licensing of broadcasting, television or cinema enterprises”

UK Law, EA 2010 the terms transwoman and transman are not legally defined, the closest legal category is gender reassignment, as per section 7 of the EA 2010:

“A person has the protected characteristic of gender reassignment if the person is proposing to undergo, is undergoing or has undergone a process (or part of a process) for the purpose of reassigning the person’s sex by changing physiological or other attributes of sex”.

The statements below (inserted picture files) directly harassing Twitter user @carolinefff in violation of her right to free speech and expression, following one of their (@LGBTpoliceuk) earlier posts.

When did it become the purview of Police Officers and police affiliated social network accounts to harangue, intimidate, harass, make pronouncements and judgments regarding accepted biological fact and empirical evidence of millennia regarding natal birth sex of males and females?

”Our network in no way condones or supports any comments made from your account Caroline. We believe that trans men are men, trans women are women and non binary people are fabulous”. (Sic.)

“If Roberta’s daughter can speak about her without misgendering perhaps you can too”.

With regards to Summary Standards of professional behaviour, page 4of The Code Of Ethics 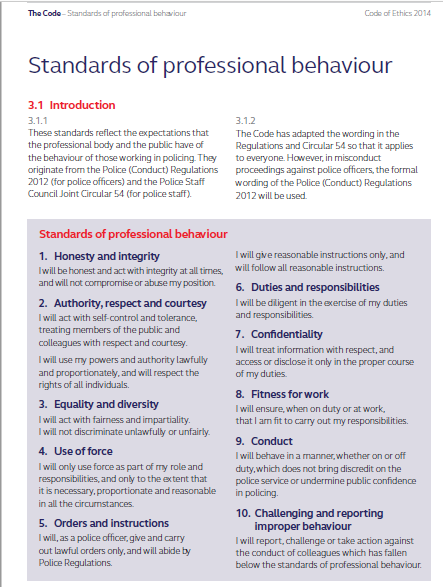 Click the left and right arrows to see the other images or click on an image to enlarge it. 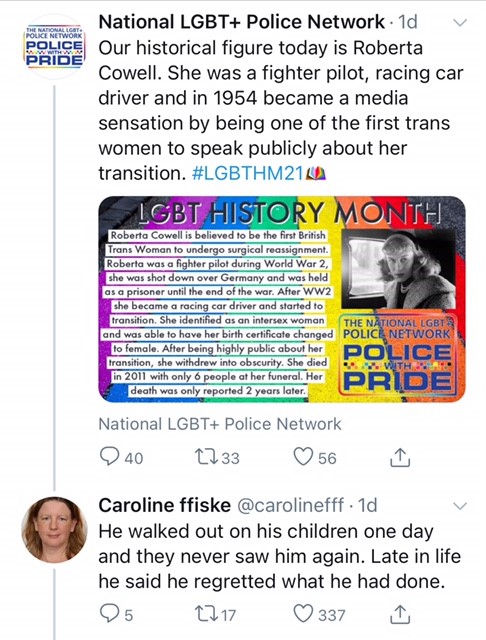 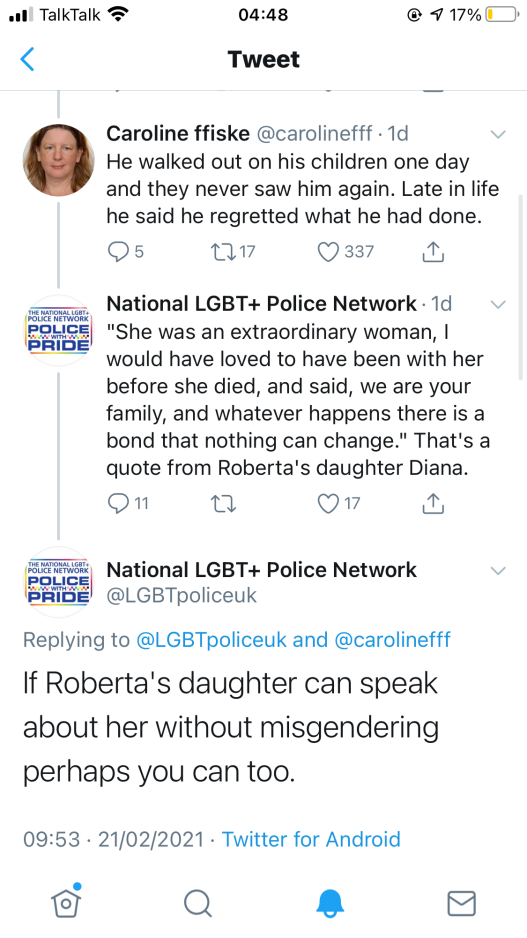 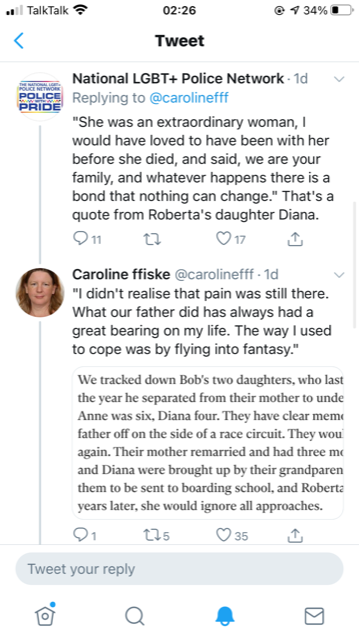 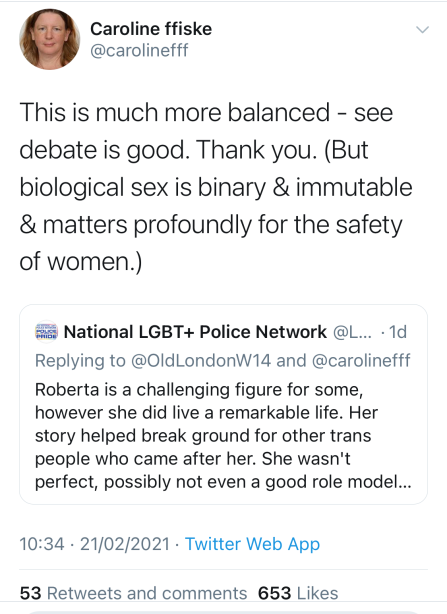 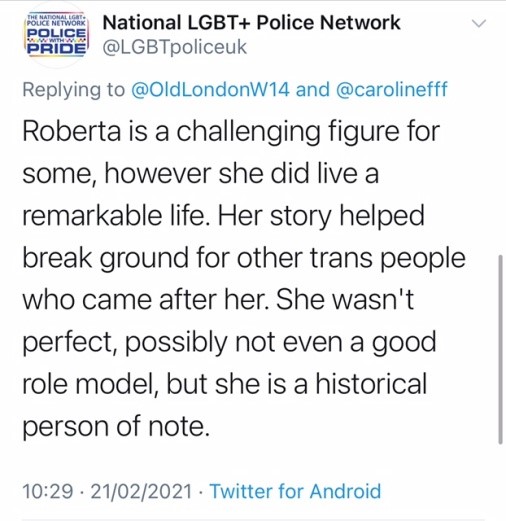 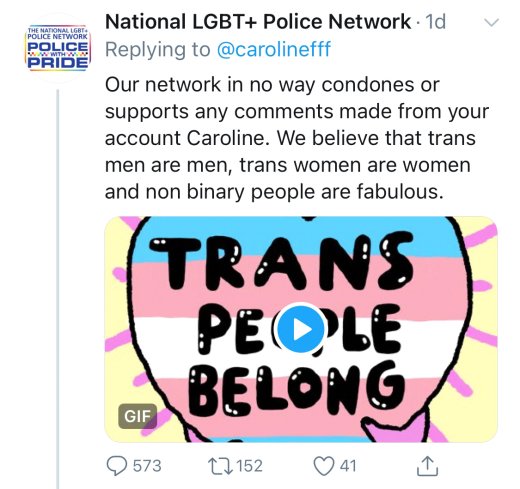 Following and interspersed with these exchanges are responses (inserted picture file below) In no particular order but are representative of the majority view.

Click the left and right arrows to see the other images or click on an image to enlarge it. 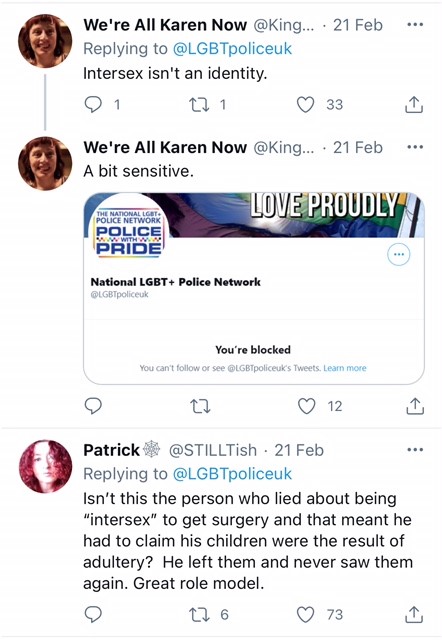 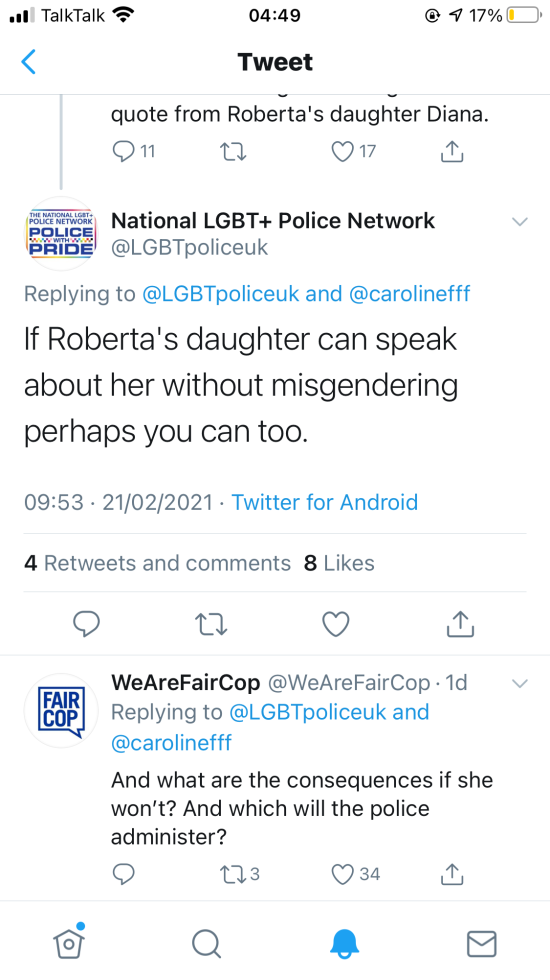 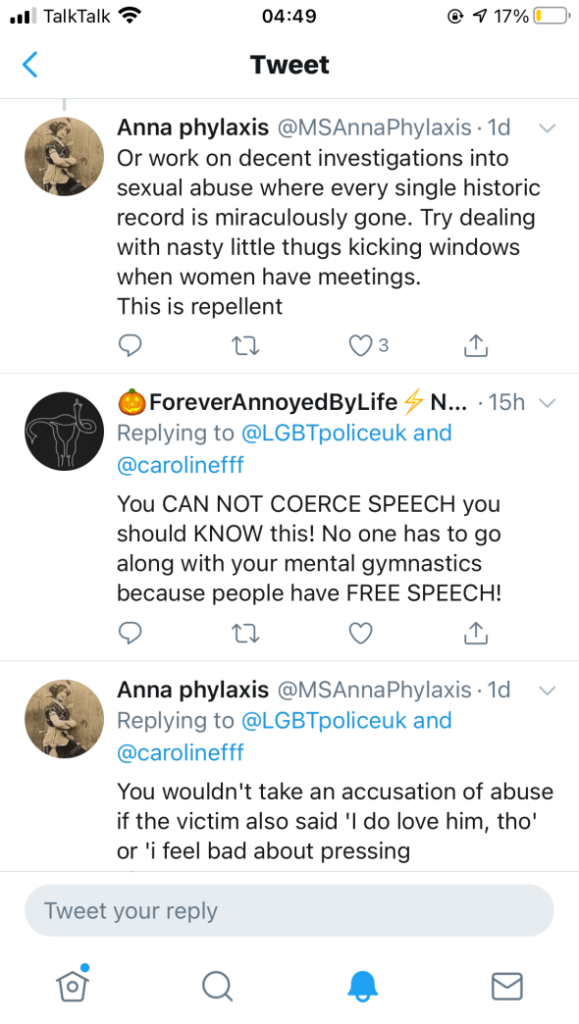 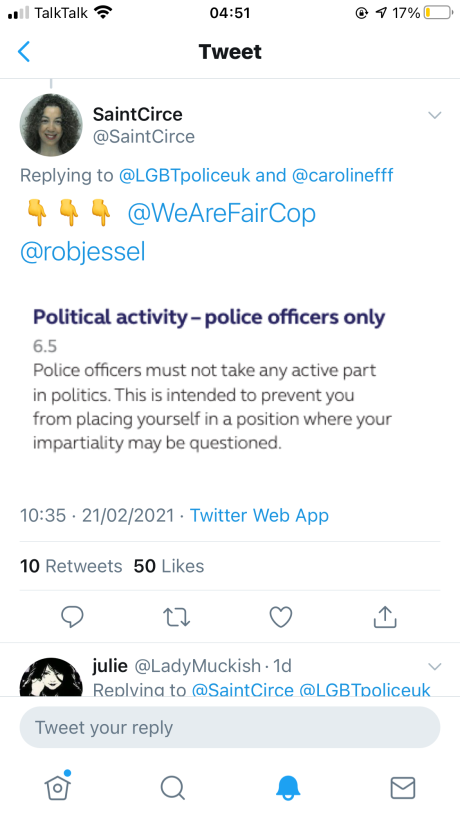 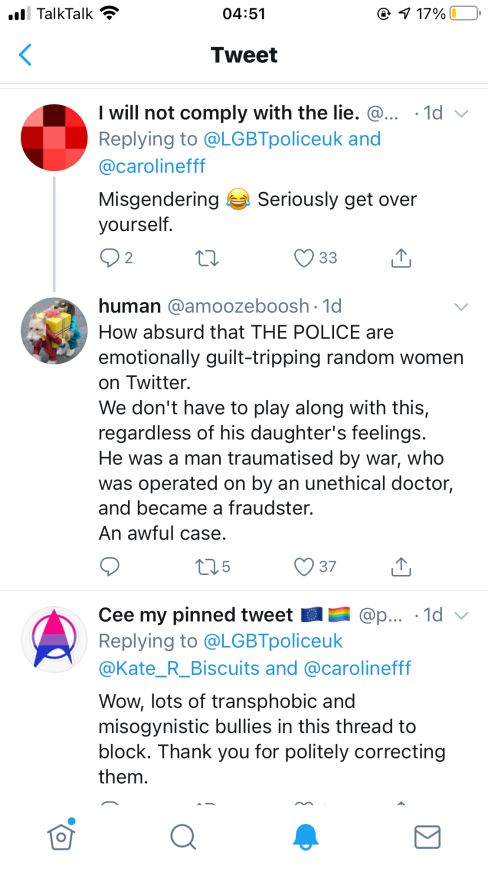 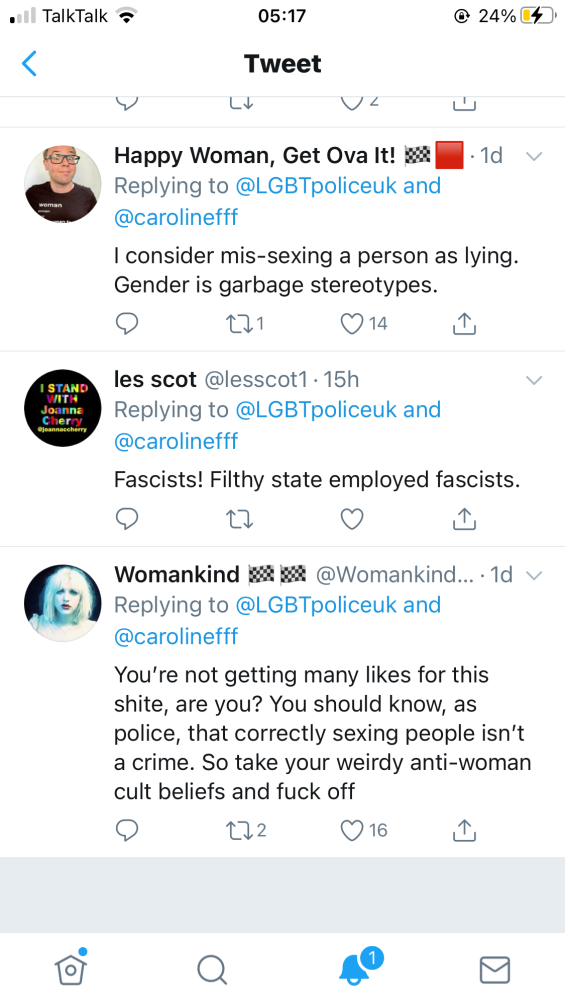 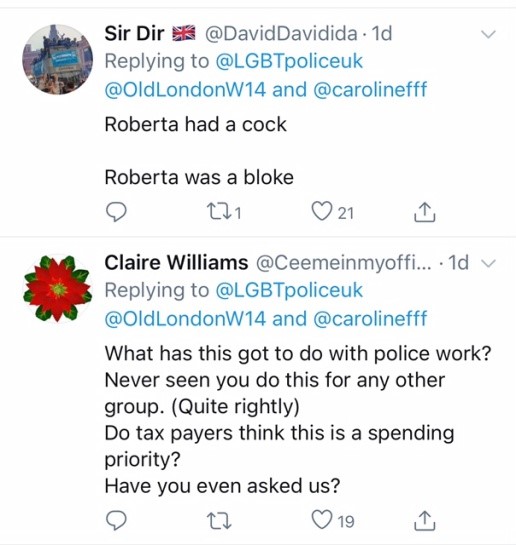 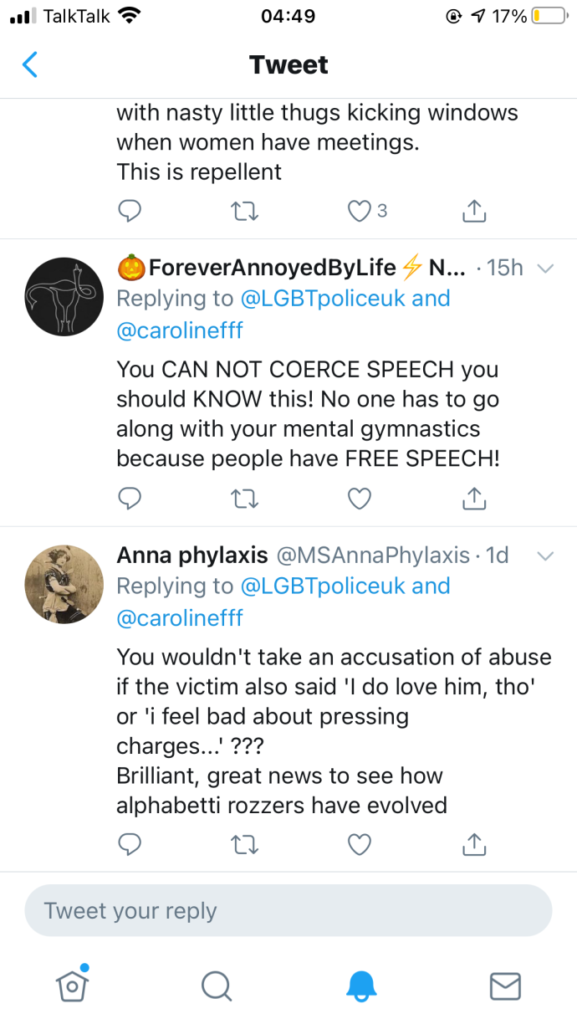 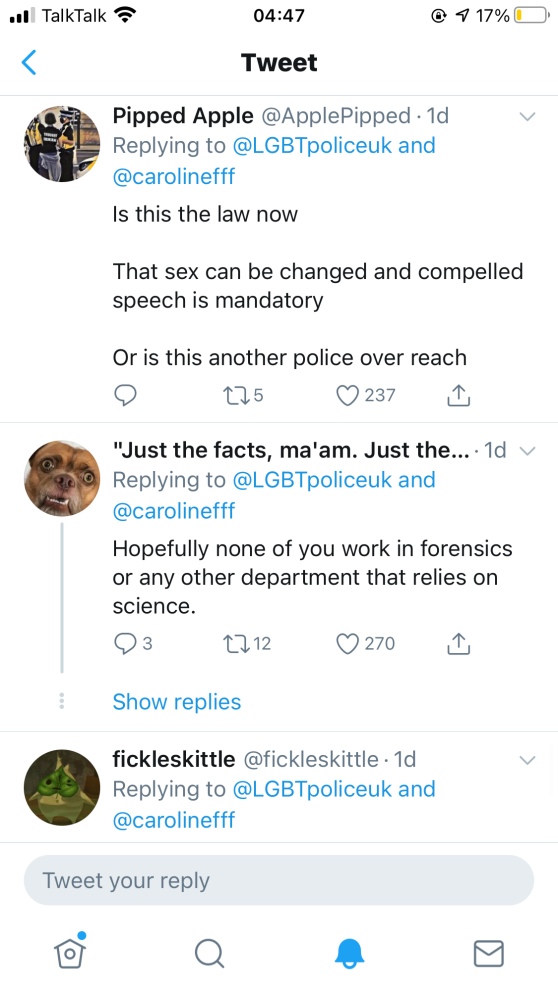 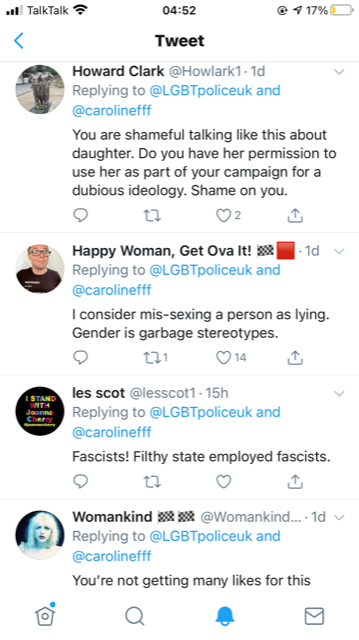 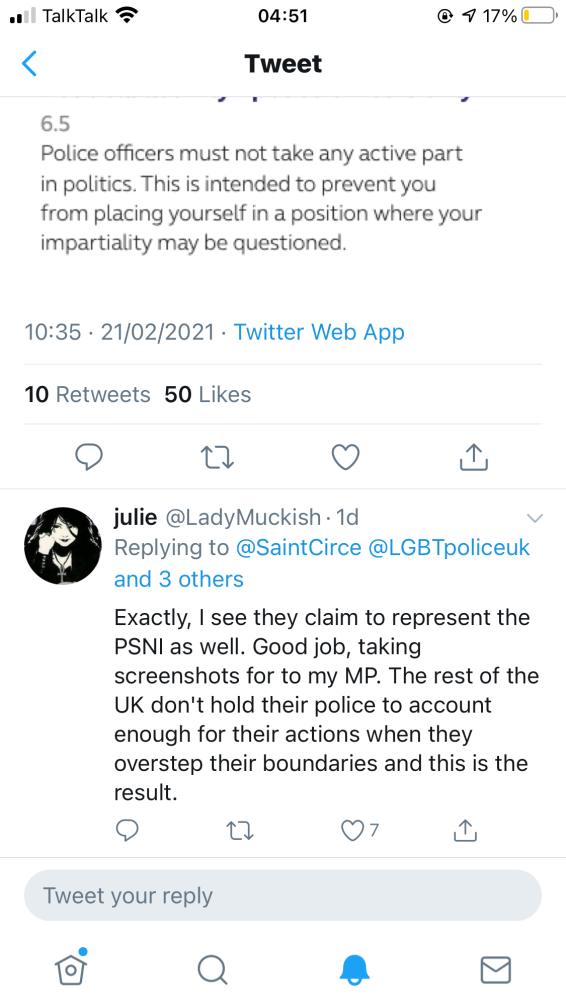 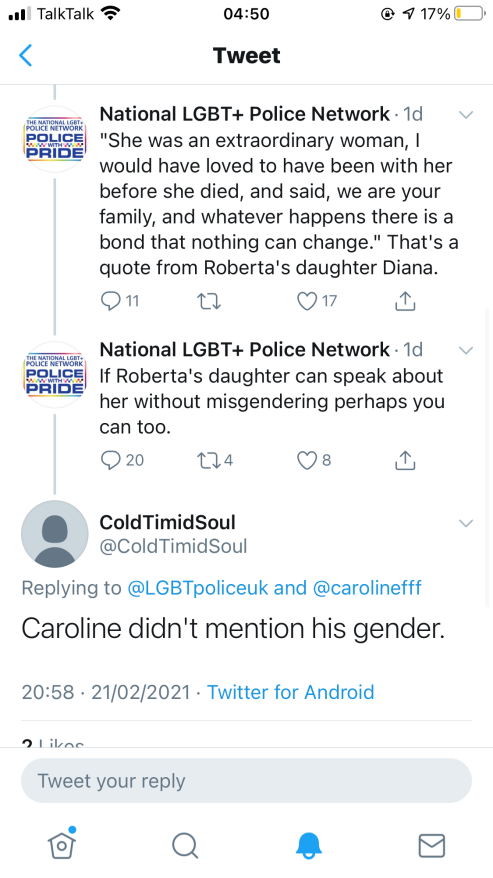 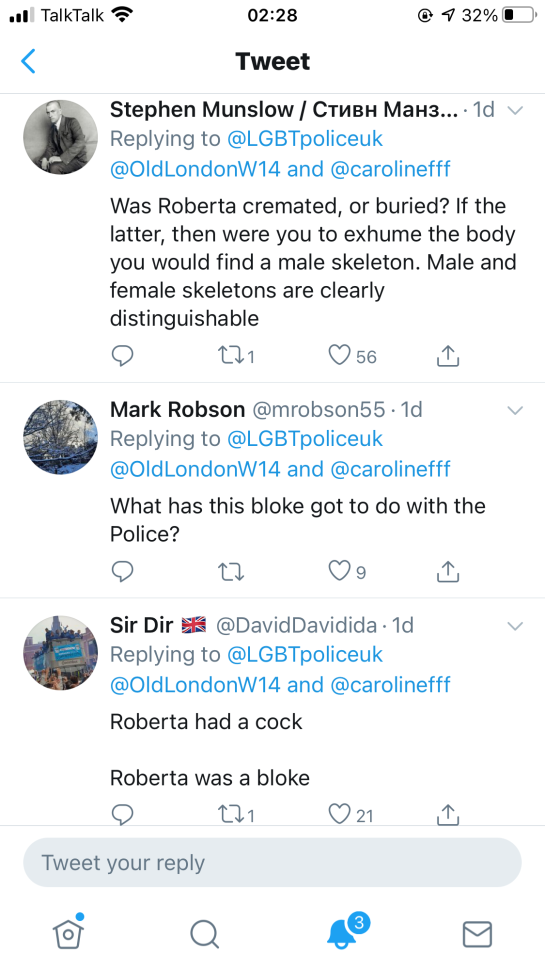 Further to the above incident the same account tweets/retweets/promotes other inaccurate, and/or inflammatory material which has not been fact checked and may also be unlawful in content, is labelling responses as “hateful comments”, or posting tweets/retweets which are lobbying or campaigning and therefore political in nature. 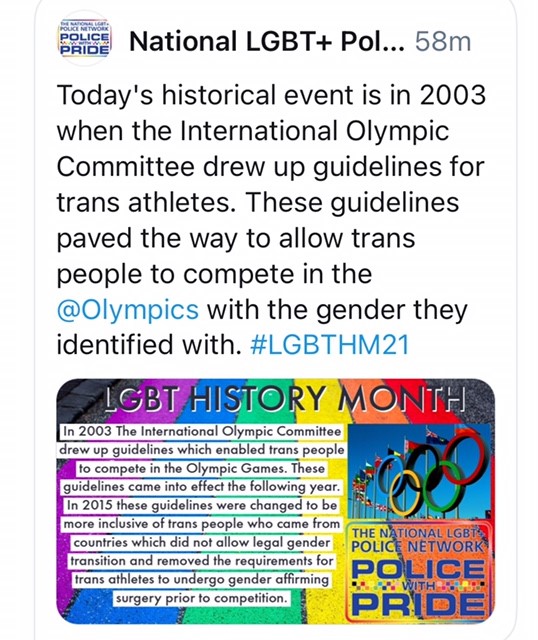 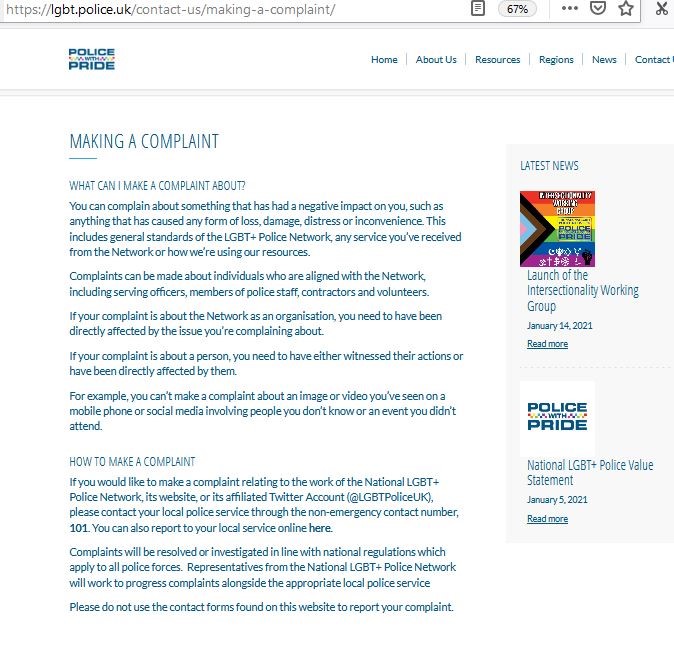 We want to make sure everyone has an equal chance to use and benefit from our services. To help us ensure we continue to do this, it would help us if you could answer the following questions. If you prefer, you do not have to answer these questions as it will not affect your complaint in any way.

Please mark all the answers that apply with a ‘X’.

What other sex is there? Humans are a dimorphic species. More gender ideology. How can you treat the concerns of, and danger to women and girls seriously if you subscribe to this nonsensical thinking?

Is your gender different to the gender you were assigned at birth?

Why is this question included?

If yes, please state the gender you were assigned at birth:

SEX is observed at birth and determined in-utero. No-one has a gender ‘assigned’ at birth, they are male or female.

We are constantly striving to improve our service. Please tell us if you have any feedback below.

It is noteworthy and significant to the nature of this complaint that the vehicle for complaint, i.e. this form does not automatically include the protected characteristic of SEX included in the Equality Act 2010, but does include the category of gender above. Gender reassignment is indeed protected. Gender, which is an undefined, inner sense of one’s feelings, and changes according to one’s personality from person to person, or imposed by socially constructed stereotypical behaviours or beliefs, is not protected.