I know a thing or two about hate. At various times I have hated several people, including my rapist from primary school and the teacher who knew what was going on and did nothing. It was only by forgiving those who asked for absolution, and turning hatred into positive action against the unrepentant, that I was able to unburden myself of this crushing, poisonous emotion.

I still have a host of unhelpful feelings, including dislike, animosity and contempt. But I don’t hate anyone.

That’s why, like many people, I was distressed by Fair Cop’s tweet on Friday with the hashtag #SayYesToHate. My opinion? I believe this was badly expressed, open to wilful misinterpretation, and alarming to our friends and followers. 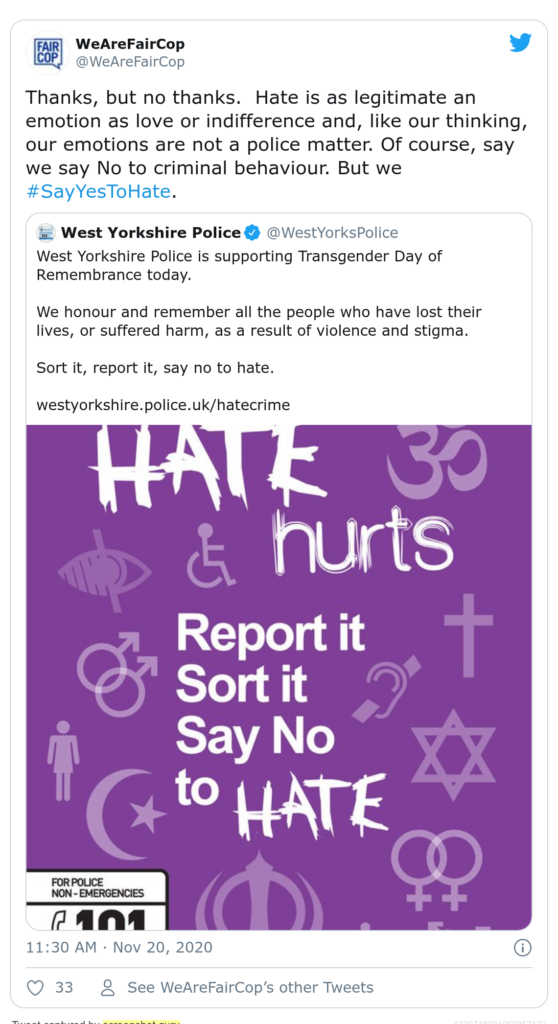 It was a poorly-worded tweet. But it tried to express an incredibly important truth; one that cuts right to the heart of one of the biggest problems we face in these troubled times.

This truth is that no authority has any jurisdiction over our emotions, not even the worst of them. The same goes for our speech, except for very specific restrictions on incitement, harassment and defamation.

The police argue that it’s important to record hate incidents — where no crime has been committed, but where someone has perceived that an action or statement is motivated by hate — because this hatred could escalate to a crime. That sounds reasonable, but we founded Fair Cop because ordinary people are having hate incidents recorded against their name for making statements such as “I think my cat might be a Methodist” or, simply, “Huh?”.

What’s more, the police’s claim that they are preventing escalation, while plausible on paper, is on closer inspection completely bogus. Fair Cop will soon be publishing the findings of our latest Freedom of Information campaign to discover whether the police monitor how many hate incidents escalate into actual hate crimes. Spoiler alert: they don’t, because they can’t. There’s more on this to come, so follow @WeAreFairCop and sign up to our newsletter to be the first to read our report.

But there is a much bigger issue here, which is that people must be free to be imperfect, and even to hold hatred in their hearts. As the original tweet said, hatred is a valid human response, even if it is an unhealthy one. It is not up to the state to monitor or regulate our emotions. In trying to do so they are, in TS Eliot’s words, dreaming of systems so perfect that no one will need to be good.

It gets worse. The College of Policing’s latest hate crime guidance defines “hatred” to include dislike, resentment and unfriendliness. It also retains the ‘victim’ perception element which enables anyone to cry “hate” to the police whenever they read or hear something that offends them. If you’ve been involved in the Great Trans Debate, there’s a chance you might have a hate incident recorded against you. And you won’t know about it unless you file a Subject Access Request to whichever force the complainant (or, as the Guidance insists, the “victim”) reported the incident. Or, when you are rejected for dream job or  volunteering role that requires an enhanced DBS search.

So there you are. People can continue arguing over Fair Cop’s tweet, but that only distracts from the far more important question of whether the state has a role in policing our thoughts.

We are all imperfect, but most of us struggle to be better. As some flawed sages say, the goal of life is not spiritual perfection but spiritual progress. We should all be free to take this journey by ourselves, without the menacing guidance of the police — or any other organ of the state.